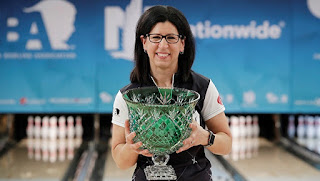 Johnson rolled 23 strikes over three matches at Wayne Webb’s Columbus Bowl to snag her 24th professional title. In the title match against top seed Shannon Pluhowsky of Dayton, Ohio, Johnson flirted with a perfect game, connecting on her first nine shots before a 10 pin ended the run in a 278-202 victory.
Johnson started Saturday’s final round of qualifying with a 289 game, leaving a 10 pin on her second shot in the final frame.

“You couldn’t ask for a better day,” Johnson said. “I’ve had some troubles on Friday nights and Saturday mornings, (the lanes) seem to get a little tighter as the week goes on. I just made a couple of little changes, tweaked a little bit with my release.”

“I tried to keep it simple, stay with that game plan. For the most part, I stayed out of trouble, had a couple of big games, got to the show and then made some good shots.”

Pluhowsky remains without a PWBA title, having lost as the No. 1 seed for the third time. Her other two losses as the top seed came in 2016. Early in Saturday’s match, she left a 9 pin on a solid shot followed by an open frame despite a good shot on the spare attempt.

“A couple of hits here and there and the game’s different,” Pluhowsky said. “That’s what it takes to win. You have to get those hits, but you have to throw it there first. That’s why she’s the greatest one out here. She gets it done.”
Colombia’s Rocio Restrepo provided a tough test for Johnson in the semifinal. In a tight match throughout, Restrepo struck twice in the final frame to force Johnson to have to match her.

Johnson obliged in a 224-215 victory, though her second shot in the 10th did make for a little drama.

“I got away with it,” Johnson said of the light hit. “The second shot got away from me a little bit, and I caught a break, fortunately.”

Johnson started her run against Colombian native Clara Guerrero, striking on seven of her first eight shots. Guerrero, meanwhile, could not put together consecutive strikes as Johnson won, 234-205.

Guerrero did string together strikes in the opening match. She struck on four of her first five shots to build a 19-pin lead against rookie Jordan Richard of Tecumseh, Michigan, who was making her third consecutive television show.
While Guerrero left the 3-6-7-10 in the ninth frame, she had built a big enough lead and took a 210-198 victory.

The PWBA Tour heads to the Dallas area next week for the QubicaAMF PWBA Players Championship at Plano Super Bowl, and Johnson is ready.
“I feel good,” Johnson said. “This is a great confidence booster going into Dallas.”

The Nationwide PWBA Columbus Open was the third and final elite-field event on the 2018 PWBA Tour. The top 24 bowlers on the PWBA points list after the U.S. Women's Open qualified for the elite events with the remainder of the 32-player field at each event completed through a pre-tournament qualifier.
Competitors bowled 16 qualifying games on Friday before the field was cut to the top 12. Six additional games on Saturday morning determined the five players for the stepladder finals.

Visit PWBA.com for more information on the PWBA Tour.

SEMINOLE, Fla. – A high-scoring week at Seminole Lanes became a much more difficult test in the stepladder finals of the Pepsi PWBA St. Petersburg-Clearwater Open on Saturday.
But No. 5 seed Diana Zavjalova of Latvia was able to fight through to win her opening match, then climbed the stepladder to capture her third PWBA title with a 201-158 victory over top-seed Daria Pajak of Poland.
The finals of the Pepsi PWBA St. Petersburg-Clearwater Open, which had five bowlers who are all in their 20s, were televised live on CBS Sports Network.
Zavjalova, who celebrated her 27th birthday on Wednesday, admitted that after a high-scoring week, she didn’t know what to expect with the finals on a pair of lanes not used during the week.
“I was nervous,” Zavjalova said. “I didn’t throw it well in the first game. Once I got through the first game, I got more comfortable, kept moving left and the other girls were struggling. I just kept moving left and just got more comfortable as the games went on.”
An early double in the title match helped Zavjalova to an 18-pin lead after six frames, and when Pajak, 25, missed a 10-pin spare attempt for the second time in the match, Zavjalova simply continued to make her spares.
“I did not see the right shape, and when I threw it good, I didn’t carry,” Pajak said. “I tried to make adjustments, and that’s when I threw bad shots. And you cannot win when you miss two spares.”
In the semifinal match against Liz Kuhlkin, 24, of Schenectady, New York, Zavjalova was in a groove, striking on six of her first seven shots. Kuhlkin, who ran the stepladder to win the U.S. Women’s Open in June, managed only two strikes and suffered her first loss in a stepladder finals, 225-157.
Zavjalova had missed two spare attempts in the opening five frames of her second match against Jordan Richard, 22, of Tipton, Michigan. After a missed 10-pin spare attempt in the fifth frame, Zavjalova did not miss anything the rest of the match, finishing with seven consecutive strikes in a 226-172 victory.
“I hate missing spares,” Zavjalova said. “Once I missed, I sat down, decided to start fresh and said ‘Let’s do this.’”
In the opening match, Zavjalova slipped past Verity Crawley, 24, of England, 185-168, in a match that took some big momentum swings in the final frames. Zavjalova had a 10-pin lead entering the ninth frame, but left the 2-4-10 on her first shot and could not convert.
Crawley, with a chance to clear the deficit, hit the pocket only to leave the 7-10 split. Zavjalova struck on her first shot in the final frame to clinch.
For Zavjalova, winning the title meant going through Crawley in the opening match and Pajak in the title match. The three were teammates at Webber International and travel together on the PWBA Tour.
“We’ve known each other for a long time and I love the girls more than anything,” Zavjalova said. “But it’s really tough to bowl against them. I’m happy that I won, but Verity and Daria bowled amazing all week. That’s the beauty of the game – it comes down to one game in the finals and it worked in my favor.”
The Pepsi PWBA St. Petersburg-Clearwater Open is the first of three elite-field events that will take place in August. Following the U.S. Women’s Open, the top 24 players on the PWBA points list earned their way into the elite-field events with the remainder of the 32-player field determined through a pre-tournament qualifier (PTQ).
Players had 16 games of qualifying on Friday before the field was cut to the top 12. Six additional games on Saturday morning determined the five players for the stepladder finals.
Visit PWBA.com to learn more about the PWBA, including the schedule, player bios and more. 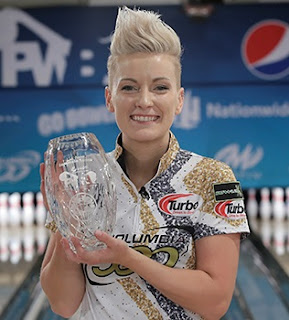 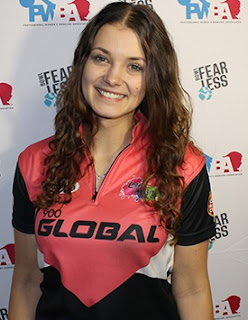 SEMINOLE, Fla. – Getting away from the game during the Professional Women’s Bowling Association (PWBA) Tour’s recent break has seemingly done wonders for Daria Pajak’s game.
In Friday’s second qualifying round of the Pepsi PWBA St. Petersburg-Clearwater
Open, the Pila, Poland native averaged 245, including a pair of 299 games over a three-game span. Now, after first having to go through the pre-tournament qualifier just to make the field, she will lead 12 bowlers into Saturday morning’s final qualifying block.

The top five players in total pinfall after Saturday morning’s six games at Seminole Lanes will advance to the stepladder finals, which will be televised live at 6 p.m. (Eastern) on CBS Sports Network.
“I feel great, I’m speechless,” Pajak said. “I lined up very well, matched up, where I had a couple of boards down the lane where I could miss, and I just never let it go. When I saw the ball was doing something different, I was trying to get a better feel at the bottom, and it worked. I could miss quite a bit.”
Pajak said the PWBA’s break in July was just what she needed, that she “needed to clear my head.” She has performed better each day this week.
She averaged 226 over eight games to lead Thursday’s qualifying event and then had a great start on Friday, with a 1,885 total (235 average) during the eight-game morning block. It was not comparable to the afternoon block, however.
After starting with games of 223 and 236, Pajak had a 299, 274, 299 again and a 266 game – a ridiculous 284.5 average over the four games.
So, the only disappointing part was missing a 300 game twice, right?

“No, not at all,” Pajak said. “I would love to have a 300 game. It’s great, a cute accomplishment, but 299, 274, and then 299 feels just as good.”
Pajak’s collegiate teammate at Webber International, Verity Crawley of England, also made a big move on Friday afternoon, starting in 15th place and moving up to fourth.
Crawley started the second round with an 814 set that included a 290 and 300 game.
“It definitely gave me a lot of confidence,” Crawley said. “I felt like my shot-making was really good, which was more important than anything.”
Liz Kuhlkin of Schenectady, New York, the 2018 U.S. Women’s Open champion, led the opening round with a 2,014 pinfall total, ahead of Kelly Kulick (1,850) of Union, New Jersey, and Pajak.
“It’s funny, because I didn’t practice yesterday, so I came into today kind of rusty, I guess you could say,” said Kuhlkin, who had the event’s first perfect game in the opening round. “It was a very pleasant surprise to bowl the way I did today.”
The Pepsi PWBA St. Petersburg-Clearwater Open is the first of three elite-field events that will take place in August. Following the U.S. Women’s Open, the top 24 players on the PWBA points list earned their way into the elite-field events with the remainder of the 32-player field determined through a pre-tournament qualifier (PTQ).
Colombian players delayed
Three players who qualified for the Pepsi PWBA St. Petersburg-Clearwater Open, based on being in the top 24 in points after the U.S. Women’s Open, were not available at the start of the event on Friday morning.
Clara Guerrero, Maria Jose Rodriguez, and Rocio Restrepo were delayed because of travel issues after competing for their native Colombia in the Central American and Caribbean Sports Games, a multi-sports event, in Barranquilla, Colombia.
Rule 6 of the PWBA rules addresses late arrivals, stating “any competitor who is late for the official start time for the first round of qualifying may be disqualified. Any competitor who is late for the starting time for any subsequent round of qualifying must enter play in the current frame and game in which her group is then bowling, and she will receive no score for frames and/or games missed.”
The players notified the tournament manager they were en route to the event, so they were not disqualified and arrived just before the start of the second round. The three bowlers will receive points based on their finishes.
Sandra Gongora, who also competed in the games in Colombia, withdrew from the Pepsi PWBA St. Petersburg-Clearwater Open earlier in the week.