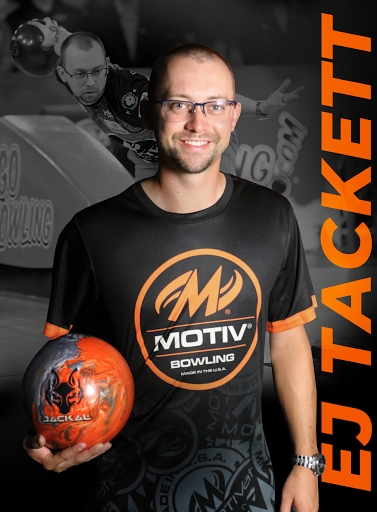 Tackett, a 13-time PBA® Tour champion, has been the face of the MOTIV® brand for seven years. The first seven years of EJ’s career are historic, seeing him win Rookie of the Year, Player of the Year, compete on Team USA in international competition and at the Weber Cup, and most recently releasing a bowling ball bearing his ExJ brand logo.
MOTIV® Staff Manager Brett Spangler said, “It is a huge point of pride for me that every shot EJ Tackett has ever thrown as a PBA Tour member has been as a MOTIV® staff player. I could not be happier than I am right now knowing that he is going to be with us for ten more years.”
This latest contract guarantees that Tackett will be on staff with
MOTIV® through at least the 2030 season. When asked what a ten-year contract with MOTIV® meant to him, EJ responded, “the people at MOTIV® are like family to me. Ten years means I don’t have to worry about anything but going out there and winning for another decade. I love throwing the best balls in the world and representing such amazing people.”
“EJ’s magazine cover says, ‘I’m the guy, you come get me’. We just responded with ‘Ok, we would love to, here is a contract for ten years…now let’s go set the bowling world on fire together!’”, commented Scott Wilbur, President of MOTIV® Bowling. “Truly it was an easy decision to make. He is a premier athlete, our true friend, and part of the corporate family here at MOTIV®”.

Posted by Warren Friedl at 6:25 PM No comments: 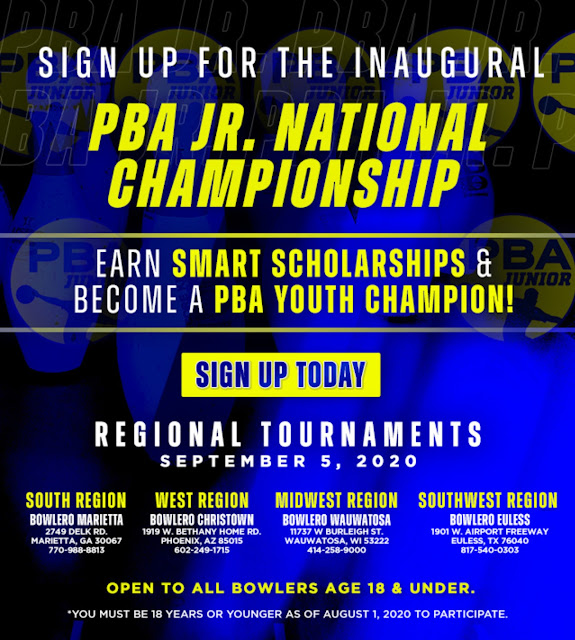 Posted by Warren Friedl at 2:39 PM No comments:

Monday the PBA announced that it was postponing the PBA50 Tour World Series of Bowling that was scheduled for Aug. 8-15 at The Villages, Florida.

New York, NY – The Professional Bowlers Association has completed its roster of twelve teams to compete in the 2020 PBA League Elias Cup with the addition of 10 of the world’s best female bowlers to the Miami Waves and Phoenix Fury.

The twelve teams now split into two divisions, Carter and Anthony, will take to the lanes at *Bayside Bowl in Portland, ME, on September 26-28, with hometown team Portland Lumberjacks, looking to defend the prestigious Elias Cup. Bowling’s most thrilling team event was postponed due to Covid-19 health and safety precautions.

The seeding round will take place on September 26, followed by eight hours of live competition broadcasted on FS1 in four telecasts on consecutive days as follows:

*Location subject to change due to local government restrictions.
Posted by Warren Friedl at 11:15 PM No comments:

THE VILLAGES, Fla. - The World Series of Bowling concept has come to the PBA50 Tour. The Professional Bowlers Association has announced the first-ever Florida Blue Medicare PBA50 WSOB, slated for August 8-15 at Spanish Springs Lanes at The Villages, Fl.

A full field of 192 of the greatest bowlers more than 50 years of age is expected for the $224,000 PBA50 WSOB event, including many PBA Hall of Famers such as Walter Ray Williams Jr., Norm Duke, Pete Weber, Parker Bohn, Johnny Petraglia and Amleto Monacelli. PBA50 newcomers and Hall of Famers Chris Barnes and Jason Couch are also expected to compete.

FloBowling will have exclusive coverage of all rounds of the competition, including four different match play rounds and all of the finals.

Faced with the global pandemic threatening the cancellation of the entire 2020 PBA50 Tour, the PBA and longtime partner Larry Ducat at The Villages worked together to create this event, in the mold of the Go Bowling! PBA Tour WSOB and its multiple opportunities for players in one location with one entry fee, which celebrated its 11th year earlier in 2020.

Health and safety measures will be paramount at the event at The Villages, considering state and local guidelines. Among other things, there will be three squads of qualifying to ensure social distancing during play.

The PBA expresses thanks to all the previously scheduled 2020 PBA50 Tour hosts and hopes to be back in 2021 to all the great partner venues.

One $750 entry fee enters each player into all four events. The PBA50 National Championship will have a first place prize of $15,000 and pay ratio of 1:3, plus eight Super Senior cash spots. The top 24 in each of the three Legend Pattern events plus four Super Senior will cash, with the winners of all three Legend Pattern events earning $3,500. Entry information is at pba.com.
Posted by Warren Friedl at 11:09 PM No comments:

Posted by Warren Friedl at 7:18 PM No comments: 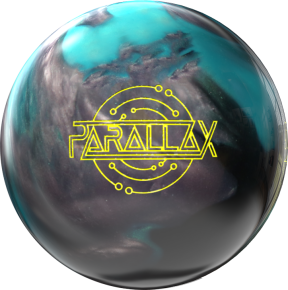 With their large weight block volume and heavy, dense materials, most asymmetrical balls from Storm have a very low radius of gyration. But the new Aeroflo™ Core isn’t like most other balls. If you look closely, you’ll see a very large portion of the inner weight block has been removed to allow light weight core material to flow around and through the unique shape inside. This design creates a much higher center of gravity while maintaining a large amount of differential, both total and intermediate. 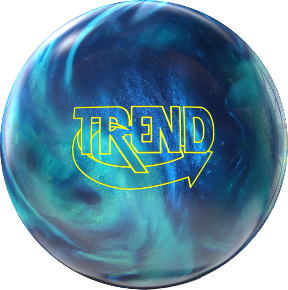 Benjamin Franklin’s famously quoted in 1789 that “there are no sure things in life other than death and taxes,” but he forgot a third guarantee in life—that in our sport, more entry angle leads to a wider pocket! And if you have been using Storm for a number of years, then you know that feeling you get when you leak the ball a little more to the outside than others on your pair and still get it to come back to the pocket! You know that feeling, and it’s a good one! It’s how tournaments are won. 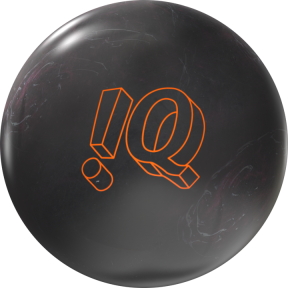 The premise is wickedly simple: create a ball that’s worthy of your time, energy, and dollars. It’s no mystery that the !Q has become a staple in Storm’s lineup of high performance bowling balls. Favored by bowlers of all levels all over the globe, anyone and everyone can benefit from the benchmark reaction the !Q series is able to provide.

Posted by Warren Friedl at 7:11 PM No comments: