Professional Bowlers Association (PBA) Hall of Famers Parker Bohn III and Mike Aulby will once again be the celebrity pro bowlers for the 11th annual Jeff Gordon Children’s Foundation Charity Bowling Tournament, which is set for Thursday in Indianapolis.

The fundraising event, to be held at Western Bowl in conjunction with NASCAR’s Brickyard 400, benefits the Jeff Gordon Children’s Foundation Pediatric Cancer Research Fund at Riley Hospital, and the Wells Center for Pediatric Research at the Indiana University School of Medicine.

In the 10 events held to date, more than $2 million has been raised.
Danny Wiseman is lending his support to another Indianapolis fundraiser, hosted by midget race car driver Dillon Welch. The “Bowling With the Stars” event will take place on Sunday, Aug. 26, at Woodland Bowl, to benefit “Sheltering Wings,” which provides services to domestic abuse victims in central Indiana.

"Re-defining what the PBA has to offer to marketers is fundamental to our success and represents a huge growth opportunity for us,” Reiss said. “Working with Shamrock will kick start our ability to develop programs that will demonstrate that the PBA offers unparalleled value to its partners.

“The PBA has concluded Shamrock is the partner we believe will elevate the PBA brand. Brian’s record of success in other sports, including NASCAR, is exactly the kind of success story we plan to develop as part of our new relationship with America’s business leaders.”

Shamrock is a privately-owned sports marketing and sales agency led by Corcoran, a former NASCAR and Fenway Sports Group Executive. At NASCAR, Corcoran spearheaded efforts to land the largest sports sponsorship in U.S. history with the series entitlement of the NASCAR Nextel Cup Series, reported at $750 million, that later evolved into the NASCAR Sprint Cup Series.

“The heart of our business is developing profitable partnerships between brands and properties to generate excitement beyond what either could achieve on its own,” Corcoran said. “Shamrock is not in the business of sponsorship; we are in the business of creating strategic and mutually rewarding partnerships. Our goal is to optimize the assets of our partners and establish value in their brands.

Shamrock's immediate priorities are to enhance and extend the PBA brand through entitlement partnership programs and other initiatives.

"We are extremely excited to forge a partnership with the PBA, which represents the elite of the world’s more than 90 million bowling participants,” Corcoran said. “Bowling is without question the largest competitive sport in the world. It has unlimited potential. Our goal will be to tap that potential by providing participants and corporate partners with unmatched experiences and value."

For more information on the PBA and partnership opportunities, contact Corcoran (bc@shamrockse.com) or Gacetta (dg@shamrockse.com) by email or by telephone at 207-899-0490.

For more information about the Professional Bowlers Association, visit pba.com.
Posted by Warren Friedl at 1:00 PM No comments:

Posted by Warren Friedl at 7:45 AM No comments:

AJ Johnson of Oswego, IL, Robyn Renslow of Brentwood, CA, Bradley Crouse, Nazareth, PA, and Breanna Clemmer, Clover, SC, all came away with championships in their respective divisions in the North Pointe Junior Gold Championships held last week at Woodland Bowl (Indianapolis). A record total of 1,929 athletes took part in the event competing for more than $250,000 in scholarships.
Posted by Warren Friedl at 12:09 PM No comments:

Sean Rash followed up his 2011-12 Chris Schenkel PBA Player of the Year crown by receiving the 2012 “Best Bowler” ESPY Award during the 20th Annual ESPY Awards ceremony at the Nokia Theatre Wednesday evening.

Rash became the fans’ choice in the bowling category thanks to a 2011-12 Tour season in which the 29-year-old right-hander won the season-ending PBA Tournament of Champions for his only title, but had six championship round finishes, including third place in the PBA World Championship. Qualifying for a record five consecutive TV finals during the World Series of Bowling helped the Alaska native dominate PBA Tour stats where he finished first in average, points and earnings.  His Tournament of Champions win was the fifth Tour title of his career.

“This is very special because it’s an award voted on by the fans—bowling fans
and sports fans,” said Rash, who now makes his home in the Chicago suburb of
Montgomery, IL.  “The fans are why we do what we do—they’re why I get up in the morning.

“Winning the Tournament of Champions, Player of the Year, getting married (to wife Sara) and winning the ESPY has made it just an unbelievable year,” Rash added. “Even though I had a frustrating start to the season, I had a lot of support from my family, fans, friends and Brunswick and without them I couldn’t have done it.”

Joining Rash at the ceremonies were fellow ESPY candidates Jason Belmonte and Mike Fagan who also were finalists for the PBA Player of the Year crown which was announced on pba.com’s Xtra Frame online bowling channel in May.

During the 2011-12 season Belmonte, who won the ESPY in 2011, won three titles and had seven top five finishes. Fagan qualified for TV shows in all four majors winning the USBC Masters, finished second in the U.S. Open, fourth in the Tournament of Champions and 12th in the PBA World Championship. He also won an international PBA Tour title.

ESPY Award candidates are selected by ESPN staff for a variety of sports
categories and special moments in athletic competition. Winners are determined
by fan voting through espn.com. 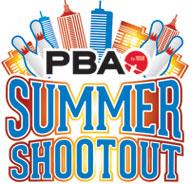 Reigning U.S. Open champ Pete Weber of St. Ann, MO, put 12 points on the board in Round 4 of the GEICO PBA Summer Shootout at 10pin bowling lounge, helping his Storm team take the early lead in the annual Manufacturers Cup competition.


The first four rounds of one ball, low-man-out singles elimination matches aired Sunday on ESPN2. In each round, nine players representing nine different bowling ball brands competed in three groups of three players each. The survivor of the low-man-out preliminary matches advance to a final match where the winner earned 12 points, runner-up 8 points and third-place finisher 7 points. Those eliminated in the preliminary matches earned lesser points.

Weber, behind a flawless seven-strike performance (three in his preliminary match and four in a row in a Round 4 showdown with Roto Grip’s Brian Kretzer of Dayton, Ohio), helped Storm take a three-point lead over Ebonite and DV8 in the bowling ball manufacturers’ contest. Brunswick’s Chris Loschetter finished third in Round 4 after an eight-count on his first shot in the three-player final match.

In the first round, Ryan Ciminelli of Cheektowaga, NY, threw four strikes in a row – two in his preliminary match and two more in the final showdown to eliminate Storm’s Osku Palermaa of Finland and DV8’s Ronnie Russell of Camby, IN, staking Brunswick to an early lead in the team competition. Russell struck on his first shot in the final match, but had a nine-count on his second shot. Palermaa finished third after an eight-count on his first attempt.

Round 2 went to Columbia 300’s Chris Barnes of Double Oak, Texas, who struck on his first three shots to edge DV8’s Mike Machuga of Erie, PA (double and nine-count). Ebonite’s Tommy Jones of Simpsonville, SC, was third after a nine-count on his first shot in the final match.

Newly-inducted PBA Hall of Famer Jason Couch, who announced his retirement from PBA Tour competition at the start of the Summer Shootout, temporarily put Ebonite into the team lead when he claimed 12 points in Round 3, ousting 900 Global’s Robert Smith of Las Vegas, who left three pins standing on his second shot. Hammer’s Bill O’Neill of Southampton, PA, was knocked out with a seven-count on his first ball.

Five more rounds of singles and doubles low-man-out elimination rounds will determine the team seeding positions for an elimination position round contest leading into the Baker doubles format stepladder finals. All remaining rounds of the GEICO PBA Summer Shootout will air on ESPN on Saturday, July 14, at noon ET and Sunday, July 15, at 1 p.m. ET.