"I hope it revolutionizes bowling" commented Bill Hall former "ball driller to the pros." We were talking about the Tri-Grip System, a new and different approach to fitting a bowling ball.

Hall’s Tri-Grip system does not involve any new tools but his understanding and extensive research of the "linear lines of the hand." His kinesiology research and intense involvement with the sport of bowling since the late ‘70’s, inspired him to spend a couple years addressing his own issue (an extremely double jointed hand) and those issues he saw in players he coached.

Hall has experience as PBA tour rep, with his company Next Level Bowling, at Bowling This Month magazine’s Super School instructional series, and doing individual coaching in the US for standouts like: Norm Duke, Danny Wiseman, Pete Weber, Parker Bohn and others. Also, his international resume includes coaching the National team in Qatar, Kuwait, United Arab Emirates and Indonesia to measurable success.

Many coaches and ball drillers can relate to the bowler who is motivated to do better in the sport and invests in coaching, but is frustrated. Getting bowling lessons is a good way to develop the skills needed to accomplish your bowling goals. But, while receiving knowledge, and getting high quality practice, execution can be stymied by an ill fitting, difficult to deliver (consistently) bowling ball. 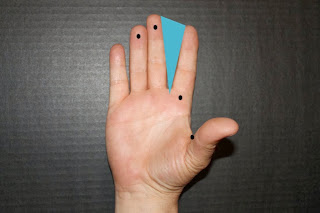 Hall’s goal is to "target everybody" with a system that features "no muscle change to the hand." He was very quick to mention that "other ways are NOT wrong." He suggests that he gets the basic span and hole sizes using a tool like the Bill Taylor Ball Fitting Ring. Similar tools to gain this basic information would still be necessary. His research and over 175 drilled balls led him to this "alternative way to fit a hand."

Focusing on important points of leverage, Hall suggests that his new system provides a ball fit that is less strenuous to control, which needs less muscle tension. When asked if the Tri-Grip was for just high level players or would it be appropriate for everyone, he responded "You need less grip strength that is why the Tri-Grip is usable for any level bowler, including kids."

When asked about the similar objectives of the Center Line Transposition or CLT technique, Hall pointed out that his system is not just a variation. But, rather than just mapping the hand across or over the ball, the Tri-Grip technique accounts for how the ball hangs on the hand and on the arm.

Hall used an example of an older bowler near 80, whose frustration brought him to Hall to check out the new system. A stroke changed his ability to control a ball, so after setting him up with the new fit "Charlie" was able to regain control and perform better than the recent past.

Discussing the Tri-Grip system with Vince Biondo a former 3 time Team USA member and owner of Eagle’s Edge Pro Shop in Island Lake, IL, Biondo mentioned some of his bowling buddies, talked about it. Buddy Rich Blake, another Chicago area pro shop operator, had invested in the system and shared the benefits. Biondo’s personal curiosity led him to try it, for his own issue. His initial reaction was of a marked improvement, but as with a lot of players, especially those with a long experience with one fit, he later started to tweak the changes. Biondo said "if you have time to invest in the process, (plan on) lots of games and lots of tweaking, do a couple balls, commit to it and have patience, you will enjoy the results."

All in all, Biondo’s conclusion is the Tri-Grip does put the hand in better position, behind the ball, helping center the ball on the pad of the palm just below the index finger (see figure 1). He did feel stretching his ring finger a tad also felt better for him. He also recommended if you believe you might take some time getting used to the system, an interchangeable thumb will help with multiple options rather than multiple plug and redrill efforts.

When I approached Chicago area pro shop operator Al Hardesty, of the Strike Shop, in Cresthill, IL. asking why he invested in Hall’s Tri-Grip system, Hardesty commented "I feel it’s a necessity to invest in new techniques and update technology." Hardesty described the system as a "very, VERY personal reflection of a player’s hand structure." He has seen "more consistency off the bowler’s hand, and an improved rev rate."

Having had the system since March, Hardesty pointed out that he has seen performance enhancement from using the Tri-Grip in his own game as well as that of customers. When following up about the systems use with every level of bowler, Hardesty mentioned using the system with some younger players including High School bowlers and even an 11 year old for their first finger tip. The Tri-Grip can be used for both finger tip and conventional grips.

The question, would you buy a new fitting system from this man, the Man being Bill Hall. Hall started drilling bowling balls at the Showboat in Las Vegas in 1977, under the tutelage of John Fantini. Hall worked with and for Brunswick, Ebonite, Columbia, and Faball. He shared his knowledge consulting with ball manufacturers and presenting seminars on balls and ball drilling to pro shop operators all over the world. Hall, also, has been involved in creating and operating two ball companies Champion and Power Play. Hall also continues to coach, check out Next Level Bowling on the web. 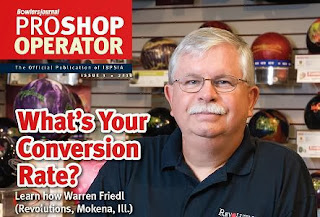 Posted by Warren Friedl at 1:37 PM No comments:

Posted by Warren Friedl at 10:29 AM No comments: