SOUTH GLENS FALLS, N.Y. – Kelly Kulick of Union, New Jersey, was in complete control of her game this week at the 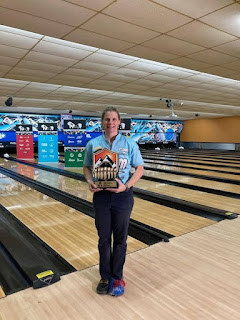 Professional Women’s Bowling Association (PWBA) Albany Open, and her masterful performance concluded with a return to the winner’s circle for the first time since 2017.The United States Bowling Congress Hall of Famer defeated two-time reigning PWBA Player of the Year Shannon O’Keefe of Shiloh, Illinois, in a thrilling title match at Kingpin’s Alley Family Fun Center, 228-217, to record her seventh PWBA Tour victory.The championship round was broadcast live on BowlTV.com, with Kulick earning $10,000 for the win. O’Keefe collected $5,000 for the runner-up finish.Kulick’s last win on tour came at the 2017 PWBA Fountain Valley Open, and her victory Saturday was her second since the relaunch of the PWBA Tour in 2015.The 44-year-old right-hander entered Saturday’s competition as the tournament leader and retained that spot through 12 more games to earn the top seed for the stepladder finals, averaging more than 240 for her 24 qualifying games.O’Keefe never let her out of her sights, however, averaging more than 238 to finish qualifying in second place.The 14-time tour champion continued to pressure Kulick as the title match got underway, rolling three consecutive strikes after a spare in the first frame to take the early advantage.Kulick maintained her hold on the pocket on this week’s 36-foot oil pattern, but she didn’t record a double through the first five frames.A small adjustment in her physical game helped her create a better angle through the pins, resulting in four consecutive strikes, starting in the sixth frame.“I talked with my tour reps and wondered if I needed to make a ball change,” said Kulick, a 17-time Team USA member. “After talking about it, I told them I knew what I needed to do. I got my hand underneath the bowling ball and started to go around it a bit more, to create more angularity off the spot. I know I have the tools and the knowledge, but you have to trust what you’re able to do. I trusted myself, like I had all week long.”Kulick entered the final frame with the opportunity to roll two more strikes to shut out O’Keefe, but a light hit on her first delivery resulted in a 7 pin. She converted the spare and struck on her fill ball to force O’Keefe to double for her second win of the season.O’Keefe, who won the season-opening PWBA Bowlers Journal Classic, left a 3-10 split on the first shot of her 10th frame, allowing Kulick to raise the trophy.Kulick had finished as the runner-up five times since her win in 2017, including earlier this season at the PWBA Lincoln Open.Saturday’s run to the stepladder finals was her third championship-round appearance in five events this season, and her confidence is growing as she looks ahead at the rest of the year.“I came out here for two reasons – to have fun and enjoy bowling again and to know I could win again,” Kulick said. “Age is just a number, and I still feel energetic, youthful and like I’m in great shape. With the way I’m throwing it right now, I’m building confidence, and I know the sky is the limit for the rest of the season. I’ve been bowling smart and trusting myself, and the fact that I’m making shows on multiple patterns means my versatility is still there, too.”O’Keefe advanced to the title match by defeating her former student-athlete at McKendree University, Breanna Clemmer of Clover, South Carolina, 247-193.O’Keefe is the head coach for the women’s bowling program at McKendree, and Clemmer attended the university from 2016-2020. O’Keefe and Clemmer helped bring the Bearcats titles at the 2017 NCAA Women’s Bowling Championship and Intercollegiate Team Championships.Clemmer, a rookie on tour this season, made her second consecutive championship-round appearance after recording a third-place finish at last week’s PWBA BVL Open in Farmingdale, New York.The 23-year-old right-hander advanced to the semifinals by defeating three-time PWBA Tour champion Stefanie Johnson of McKinney, Texas, in the opening game of the stepladder, 213-192. Clemmer closed with four strikes to shut out Johnson, who made her first championship-round appearance of 2021.The 66-player field in South Glens Falls bowled 12 games Friday, before the first cut to the top 32 athletes. Advancers bowled an additional six-game block Saturday morning, with the top 12 competing in a final six-game round to determine the four bowlers for the stepladder, based on 24-game pinfall totals.

The PWBA Tour will head to Smyrna, Tennessee, next week for the PWBA Greater Nashville Open. The event will be held at the Smyrna Bowling Center and take place June 10-12.

Posted by Warren Friedl at 6:03 PM No comments: