Jason Sterner of McDonough, GA, who had never finished higher than seventh place in a Professional Bowlers Association (PBA) Tour event before the 2012-13 season, won his first PBA Tour title in the Don Carter Classic with a nearly-perfect 299-235 victory over top qualifier Wes Malott of Pflugerville, Texas, at Thunderbowl Lanes in Michigan. 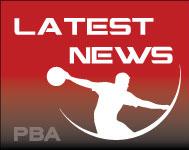 Sterner, who lost a 199-177 decision to eventual champion Tom Daugherty in his only previous PBA television appearance in the Bowlers Journal Scorpion Championship during the GEICO PBA World Series of Bowling earlier in the season, lost his chance at the 23rd nationally-televised 300 game in PBA history when he left a solid 10 pin on his final shot.

He also lost a bid to join Bob Benoit of Topeka, KS, as only the second player to win his first PBA Tour title with a 300 game. Benoit won the 1988 Quaker State Open in Grand Prairie, Texas, for his first title in his first PBA television appearance.
“The biggest thing I learned from my first show was getting rid of the nerves, and to trust your decisions,” Sterner said. “It’s a little added pressure to bowl on TV, but once you get comfortable, and trust your decisions, it’s a lot easier.
“I felt very confident,” he added. “I had the right ball, I knew what moves I needed to make and it was just a matter of going through my routine and believing in it. After the first couple of shots, I could see how the lanes were changing, and it just came easy. It was definitely a great feeling.
“When I realized the match was done, I realized I had a shot at 300, and the pins just kept falling,” Sterner continued. “I don’t think I’ve ever bowled that good of a game under pressure, ever.
“The last shot, I liked. I thought it was a great shot, but at that point I was so ready to celebrate the win, the 300 game wasn’t even important.”

With his first title, Sterner also earned his first opportunity to compete in the Barbasol PBA Tournament of Champions, March 26-31 at Woodland Bowl in Indianapolis.

The Don Carter Classic was the third of four PBA Tour events held during the PBA Detroit Winter Swing. The Earl Anthony PBA Players Championship will conclude the Winter Swing on ESPN on Sunday, March 24 at 3 p.m. ET when top qualifier Sean Rash of Montgomery, IL, meets challenger Scott Norton of Mission Viejo, CA. The telecast also will include the PBA League Earl Anthony round, the final qualifying round heading into the Elias Cup finals. The Anthony PBA League round qualifiers are Terrell Owens’ Dallas Strikers, Chris Paul’s L.A. X, Jerome Bettis’ Motown Muscle and a fourth team that will advance from the Clash eliminator round.
﻿
Posted by Warren Friedl at 11:04 AM