Roto Grip Lets Us Look Behind the Curtain for 2014

Roto Grip announces, the newest additions to the Roto Grip family of performance bowling balls set to hit pro shop walls on January 7th, 2014.
The HP4™ line expands reaction with the addition of the new Hyper Cell™. In the HP3™ line the Asylum™ joins the fray, while in the HP2™ line the Uproar™ rounds out their newest creations.

With the success of the original Cell™ and Nucleus™ Core back in 2009 and given the more recent success of the MicroBite™ solid coverstock used on the original Defiant™, Roto felt it was time to mix the best of the past and the strongest of the present into one. And so the Hyper Cell was born. There is no doubt the Defiant series of balls have been quite successful over the last couple years, but we knew it was time for something just a little more special. Wrapped with the 80H™ MicroBite solid reactive cover, this ball will create even more midlane motion and more continuation than ever before in the HP4 line.

Utilizing the proven Middle Roll 70™ core that has made the Disturbed™ and Deranged™ staples in most arsenals, Roto set out to create another valuable option in this line so they wrapped this sweet rolling core with a 63MH™ Hybrid reactive coverstock. As we all know, hybrid creates the best of both worlds with ease through the front thanks to the pearl and control on the backends thanks to the solid. 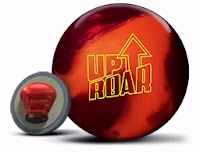 Given the performance of the Rumble™ Roto Grip added a pearlized version. This new addition features the same Late Roll 51™ Core which will provide plenty of length and superb control off the breakpoint.

Posted by Warren Friedl at 3:22 AM