Jason Belmonte, with a strike on his final ball, defeated Wes Malott of Pflugerville, Texas, to win the Barbasol Professional Bowlers Association Tournament of Champions.  Belmonte, a 30-year-old two-handed player, defeated Malott, 219-218, after earning the top berth in the stepladder finals by 363 pins over Dom Barrett, but he escaped with his one-pin victory when Malott left an 8 pin on his first shot in the 10th frame.

The win marked the fifth 'Major' in a row for Storm and Roto Grip staffers. 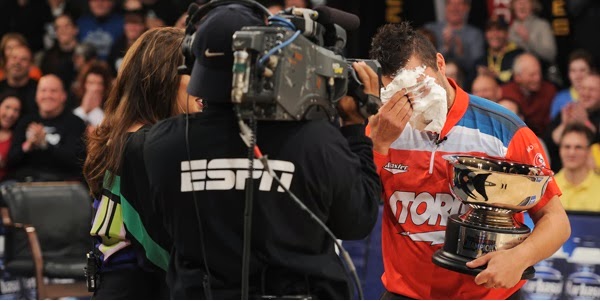 Belmonte collected his eighth career victory and second PBA major title just a week after being named 2012-13 PBA Player of the Year. He also earned $40,000 and a celebratory Barbasol shaving cream pie-in-the-fame from close friend and fellow competitor Bill O’Neill.
“I got extremely lucky,” Belmonte said. “When it really counted, I didn’t throw a good shot and gave Wes a chance. I was pretty sure he was going to win. I couldn’t believe it when I looked up and saw the 8 pin standing.”
The victory avenged Belmonte’s 214-156 loss to Malott in the 2013 U.S. Open title match, another tournament Belmonte had dominated until the final game.
"Other than the U.S. Open, this was one of my best start-to-finish performances ever,” Belmonte said. “I’m extremely proud to put my name on this trophy.
"To win a major championship and player of the year in the same week? That’s pretty tough to beat,” he grinned.
Malott advanced to the title match with a 205-202 victory over Barrett, the 2013 PBA World Champion, in a contest where strikes were hard to come by late in the game. Barrett failed to convert the 2-8-10 split in the seventh frame, giving Malott the edge. But Malott was unable to take advantage, leaving four consecutive 10 pins to keep Barrett in the match. Needing a strike on his first shot in the 10th frame to win, Barrett also left a 10 pin.
In the second match, Dan MacLelland made a fatal mistake when he left the 4-6-7-10 split in the fourth frame and failed to convert. Malott struck on eight of his final nine shots to race away with a 248-199 win to end MacLelland’s hopes of becoming the first Canadian to win a PBA Tour title.
In the opening match, MacLelland, a fifth-year PBA player making his seventh career television appearance, eliminated defending Tournament of Champions winner Pete Weber of St. Ann, MO, 259-211. Weber, a 37-time PBA champion who was making his 133rd television appearance, made two uncharacteristic mistakes – failing to convert the 3-10 split in the first frame and missing the 3-6-10 in the fifth – and MacLelland answered with a string of eight strikes to end the 51-year-old Weber’s bid for a record 11th PBA major title.
PBA coverage continues on ESPN next Sunday at 4 p.m. ET with the PBA Super Clash featuring a showdown match between 2011-12 PBA Player of the Year Sean Rash of Montgomery, Ill., vs. newly-named 2012-13 PBA Player of the Year Jason Belmonte of Australia followed by a CP3 PBA Remix at 5:30 p.m. Coverage of the 2014 PBA League season begins on ESPN on Sunday, Feb. 9, at 3 p.m. ET.
BARBASOL PROFESSIONAL BOWLERS ASSOCIATION TOURNAMENT OF CHAMPIONS Thunderbowl Lanes, Allen Park, Mich., Sunday