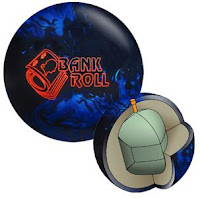 900 Global reports “The new Bank Roll creates an immense footprint in oil thanks to a new blend of resins, and revolutionary “NEAT” finishing process (on the Black/Blue Hybrid “S76 Reactive” coverstock).  Developed for heavy oil, the Bank Roll provides a strong continuous downlane move with the most overall hook in the 900 Global line-up.”

Further “The Bank Roll features the “Self Righting Core” (SRC). The SRC is both homogeneous in nature and also mono-monostatic (a body with a single stable resting position is called monostatic, and the term mono-monostatic has been coined to describe a body which additionally has only one unstable point of balance). The unique core shape contains only one stable point. Unlike all other cores in the industry the SRC core will always move and twist to its stable position regardless of how or where it is placed. It will right it self!” Radius of Gyration (RG) - 2.481.  RG Differential - 0.054. Look for the new ball in July.
Posted by Warren Friedl at 8:52 AM