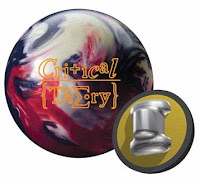 Starting at the top, the Crown™ Line addition is the Critical Theory with the “Triliptic™” core (which now powers the Theory™ and Infinite Theory™), wrapped in “Insight™ Pearl Reactive” coverstock finished at 4000 Abralon in Cherry/White/Obsidian. (All balls are #15) Radius of Gyration (RG): 2.49. RG Differential (Diff): .058.


Remember that ball motion is a culmination of the numerous factors like coverstock material, surface texture, porosity, weight block dynamics, layout, etc. When considering all of these variables, it is truly a technical feat to be able to balance all of these items and produce a bowling ball that meets the high standards you’ve come to associate with Roto Grip.
With the new Critical Theory, Roto Grip is expanding the Theory series with its first pearl Insight™ coverstock. Designed to maximize dry lane traction, this shell will help increase your entry angle and sharpen your break point (CATS testing proved that the Critical Theory created the most entry angle in the entire product line), all in an effort to help you strike more. Its textured 4000-grit surface increases the Ra value, minimizes oil sensitivity, especially at the end of the oil pattern, and maximizes bowling enjoyment. 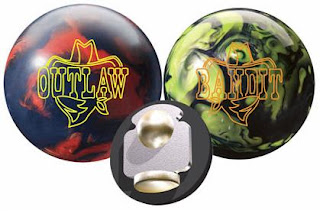 In designing the Outlaw and Bandit, Roto Grip reports “our goal was to create a completely new weight block shape (the new Caliber™ weight block) which maximizes pin action, accomplished through increased energy transfer (testing showed an increase of 12% when compared with a traditional core design), and works for both rev dominant and speed dominant players alike.
The Roto Grip Outlaw features a 2000 grit Abralon Black/Mahogany surface on the new “Inception Solid reactive” coverstock. The Bandit Charcoal and Yellow "pearl Inception™" cover is 1500 and polished.

In addition, the new coverstock blend (“Inception™”) proved itself right from the outset, hence the name. The surface topography showed Ra values up nearly 10% from previous blends.

Roto reports further "The highly polished Bandit and 2000-grit Outlaw both handle a variety of conditions ranging from a typical house shot to tough tournament action. When you’re looking for “long and strong” pick the Bandit. The Outlaw will be there when you need an earlier, more predictable reaction." Radius of Gyration (RG): 2.57. RG Differential (Diff): .048.

Posted by Warren Friedl at 9:23 PM